On the last day of the APS April meeting in Albu-querque, four busloads of physicists, together withaccompanying persons and some members of thescience press, headed for the Trinity Site, a littleover a hundred miles away, where the first atomicbomb had been exploded in the early morning of July 16, 1945. Because the site is within the WhiteSands Missile Range, it is normally closed to thepublic, and special permission had to be ob-tained for the group to make its visit.

The explosion vaporized the 100-ft. towerfrom which the bomb was suspended, andcaused the top layer of sand for hundreds ofyards around to fuse into a greenish glassy sub-stance now known as “trinitite”. Because it wasradioactive, most of it has been removed, butsome is still protected by a low-lying shed about100 yards from Ground Zero. In the top photo,White Sands public affairs officer Jim Ecclesgestures at the trinitite while members of thetour look on. The photo at left shows what re-mains of a water tower at the McDonald ranchabout 2 miles from Ground Zero—the blast de-stroyed the windmill on top of the tower butspared the rest of it because of the lay of theland. At far left is pictured the obelisk at GroundZero itself. The person in the foreground is bentover in characteristic trinitite-hunting mode.

At bottom, a member of the tour takes a pictureof one of the historical photographs that are storedin the McDonald ranch house, where the pluto-nium for the bomb was assembled before beingtransported to Ground Zero for the test. 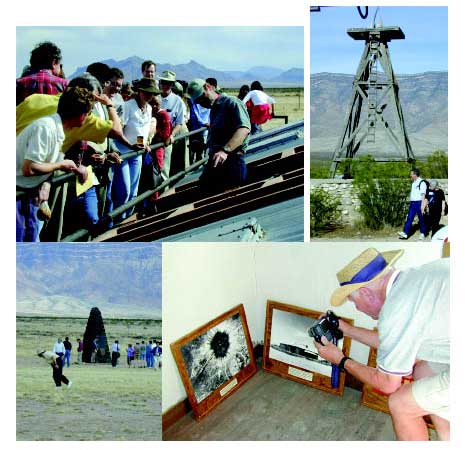