A Nanoscale Peek Inside the Cell 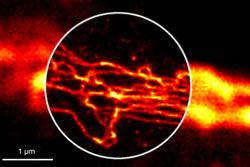 Super resolution fluorescence microscopy has emerged as a powerful research tool, allowing biologists to resolve the features of living cells on the nanometer scale, an unprecedented feat, according to APS March Meeting session speakers W.E. Moerner of Stanford University, recipient of this year’s APS Langmuir Prize, and Stefan Hell of the Max Planck Institute for Biophysical Chemistry in Gottingen, Germany.

“50 years ago you couldn’t imagine getting inside the cell and viewing cellular processes unfolding with such clarity”, said Moerner, who pioneered the technique of single-molecule spectroscopy and imaging in the late 1980s. Decades later, the use of single molecules as nanoscale emitters or fluorescent markers for a number of biological and chemical processes have brought unprecedented detail to numerous areas of research.

Moerner has revealed previously unseen shapes of filaments in living bacteria and resolved single molecules in three dimensions far beyond the diffraction limit. “By randomly turning on different molecules which sample different parts of the structure, you can sum up all of those points of localization and get the final structure. This is an idea that has grown into many different technologies, but all build on using single molecules to image,” said Moerner.

Stefan Hell theoretically conceived and experimentally developed the first far-field optical microscope that breaks the diffraction limited resolution barrier, as proposed over a hundred years ago by German physicist Ernst Abbe. Dubbed Stimulated Emission Depletion microscopy or STED, this novel method was essential to the realization of super resolution imaging.

In a STED microscope, a synchronized pair of laser pulses excites fluorescence from a dye in the sample, and then shrinks the size of the fluorescent spot by a depletion pulse. Depletion quenches the excited molecules to the ground state by stimulated emission, thereby stopping fluorescence. By spatially arranging the STED pulse in a doughnut shape, only the molecules at the periphery of the spot are quenched—the center of the doughnut, the region closest to the sample being observed, remains fluorescently illuminated. By preventing fluorescence at the outer part of the “donut” or focal spot, resolution is drastically sharpened.

“We use the phenomenon of stimulated emission to annihilate the excitation process. We actually want to reduce the area in which molecules get excited, but that is not possible. So what do we do? We apply a beam of light that is able instantly to annihilate excitation—push it down to the ground state, and technically we do this by modifying the beam so that it forms a donut, and then you squeeze the area of excitation to a much smaller region,” said Hell.

Two molecules that would otherwise resemble a blurred blob can now be viewed individually by sequentially switching one of them off through STED, the hallmark of super resolution microscopy.

“One of the things that is exciting about the level of detail and preciseness in images of the different stages of the cell cycle that super resolution microscopy is able to provide is that these are images of living cells—previous experiments usually involved antibodies and the fixing of cells,” said Moerner.