Tiny and chargeless, neutrinos leave barely a trace on their journey around the cosmos—elusive players in the hunt for dark matter, the study of our Sun, and the evolution of the atom. Today, the vibrant field of neutrino research cuts across many areas of physics.

Yet we may never have confirmed that neutrinos burst from stars—or discovered why so many of them escape our detectors—had Masatoshi Koshiba listened to his high school physics teacher.

The future Nobel laureate was born September 19, 1926, in the seaside city of Toyohashi, Japan, the son of a military father. As a child, he liked mathematics, and as a teenager, he enjoyed reading The Evolution of Physics, a book on the history of physics by Albert Einstein and Leopold Infeld. Koshiba excelled at Japanese fencing, but after a bout of polio and diphtheria, took up building model airplanes from bamboo and rubber bands. He contemplated running a model airplane shop in the future.

After two attempts, the young Koshiba passed the entrance exam for a prestigious boarding school in Tokyo, arriving in the wrecked and burned hull of the city four months before the end of World War II. A classmate had found a usable transformer and jerry-rigged it to boil water, creating a hot outdoor bath on campus that would change Koshiba’s life.

Koshiba was considering studying German literature at university. Then one night in the bathtub, he overheard a physics teacher—who had flunked him—gossiping to a star pupil about Koshiba’s university plans. “Whatever he chooses to apply for, it cannot be in the physics department,” the teacher said.

Koshiba was furious. He switched his focus, crammed for one month, and passed the requirements of the physics department. The star pupil failed, Koshiba later recalled. 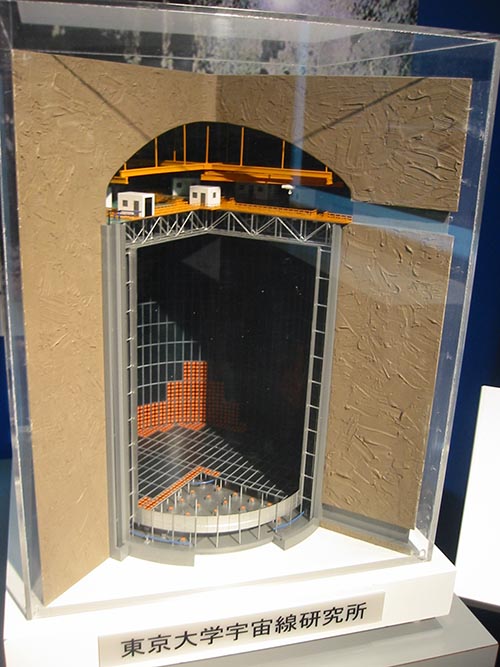 Model of the Kamiokande Detector

At university, Koshiba struggled. His family fell on hard times, and to help, he tutored wealthy children and unloaded ships overnight at the docks, leaving little time for coursework. Then a connection through his boarding school convinced the University of Rochester to give Koshiba a graduate scholarship in 1953. There, he would earn his PhD in just two years—racing to get the guaranteed $400 per month salary for degree holders, which he needed to live.

For the next three decades, Koshiba worked on cosmic ray collaborations and particle accelerators all over the world. Then in the early 1980s, he turned his attention to the popular grand unified theory (GUT), imagining an underground detector that could capture its signature proton decay. In 1983, Koshiba had an enormous vat of water installed deep inside a tin and zinc mine in Kamioka, a mountainous town in central Japan, as the basis for his new detector.

The Kamiokande detector didn’t detect proton decay as Koshiba intended. But after some reconfiguring he suggested, it made a major contribution to another mystery: the solar neutrino problem. In the late 1960s, Brookhaven National Laboratory scientist Raymond Davis Jr. captured the first presumed solar neutrinos with his detector, located in the Homestake Gold Mine in Lead, South Dakota. Only a third as many had turned up as the standard solar model predicted, suggesting a problem with our understanding of either neutrinos or the Sun.

Neutrinos passing through water produce a burst of light. In 1987, an exploding star spewed neutrinos across neighboring galaxies—and at least 11 of those neutrinos hit the Kamiokande detector. Graduate student Keiko Hirata had written criteria for detecting a neutrino signal, and she noticed the telltale peak in the data. The fiercely guarded first record of supernova neutrinos appeared in Physical Review Letters (Volume 58; Issue 14).

By 1990, Koshiba’s detector had found solar neutrinos, supporting the Davis numbers and, crucially, confirming that the neutrinos originated from our sun.

Still, the question remained: why is there a discrepancy between our mathematical model of the sun and actual observations of solar neutrinos? What’s more, results from Kamiokande had revealed a new anomaly: an unexpected ratio of muon to electron neutrinos.

Fortunately, Koshiba was a better mentor than his high school physics teacher. Takaaki Kajita, one of Koshiba’s graduate students, led a new Super-Kamiokande experiment that made the clinching observation in 1998: neutrinos oscillate between different forms, allowing them to dodge detectors—and proving they have mass. The finding required a rewrite of the Standard Model.

In 2002, Koshiba and Davis shared the Nobel Prize in Physics “for pioneering contributions to astrophysics, in particular for the detection of cosmic neutrinos.” Kajita also shared a Nobel for his work 13 years later.

Fond of metaphor and pragmatic advice, Koshiba kick-started many research ideas that younger physicists pursued to great success. In the half century after World War II, he helped shape Japan into a high-energy-physics powerhouse and attract significant international attention. For example, Koshiba dreamed of bringing a next-generation linear collider to Japan. Before dying in 2020, he finally saw plans for one, the International Linear Collider (ILC), commence.

Koshiba faced major financial and societal setbacks that would have derailed most from a career in physics. But just like ghostly neutrinos—hiding in plain sight all around us, recognized only by a stroke of luck, perseverance, and the right conditions—Masatoshi Koshiba burst through. He could have ended up working odd jobs, teaching German literature, or selling model airplanes. Instead, he helped solve one of the leading scientific mysteries of the late 20th century.