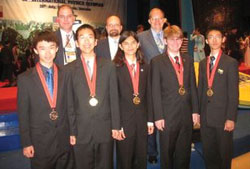 The medals were awarded at the competition’s closing ceremony on July 28th. Among the festivities were a banquet, several speeches, and lively music and dance performances. The US placed second alongside South Korea and India, while China and Taiwan tied for first place. Both the coaches and team are extremely proud of their high ranking among stiff competition–a reflection of their talent and hard work.

The theoretical exam provided the basis for all problems in the experimental exam. Participants were expected to use basic laboratory instruments like voltmeters, diodes, transistors, along with more sophisticated equipment such as dual trace oscilloscopes and generators.

Their trip certainly wasn’t devoid of play; much time was spent sightseeing and traveling around Hanoi. The team rode junks, or Vietnamese sailing vessels, along Halong Bay and explored Thien Cung (“heavenly palace”) cave, a beautiful grotto of fused stalactites that form odd, drip-like shapes. Visits to Buddhist temples and pagodas, munching on authentic Vietnamese cuisine, and soaking up the hot sun made for a fun vacation.

The event is sponsored by The American Association of Physics Teachers, which also selects the participants and organizes the training camp at the University of Maryland. Additional funding comes from the American Institute of Physics and its member societies, including APS.

Created in 1967 by Eastern European nations, the first Physics Olympiad was held in Warsaw, Poland. Western countries began to participate throughout the1980’s, with the US entering in 1986 as the program expanded. Since then, the US has continually ranked near the top 10 of all participants. Today, high school students from over 60 countries take part in the nine- day competition. The Vietnamese Physical Society and Ministry of Education and Training organized this year’s Olympiad.