Together, APS OGA and Society Members Set Record for Actions in 2020

“I’m extremely proud of the dedication this year from both APS members and our staff. Working together, we saw a record number of actions by APS members, advocating for physics and amplifying their voices for science. The number of contacts made to congressional and executive branch officials is more than seven times our total in 2019,” said Mark Elsesser, Interim Director of APS OGA.

In January 2020, the office kicked off the new year with APS’s annual Congressional Visits Day, when nearly 70 APS members advocated for the Society’s science policy priorities on Capitol Hill. Representing 26 states across the country, groups of these volunteers participated in nearly 100 meetings to make the case for science policy priorities determined by APS members and leadership. During the meetings, APS volunteers requested that members of Congress: support the Combating Sexual Harassment in Science Act; cosponsor the Keep STEM Talent Act; preserve methane emissions regulations on the oil and gas industry; introduce legislation to keep the Federal Helium Reserve open and create a robust helium recycling program; and include funding increases of at least 4 percent real growth for key science agencies during the fiscal year 2021 appropriations process. 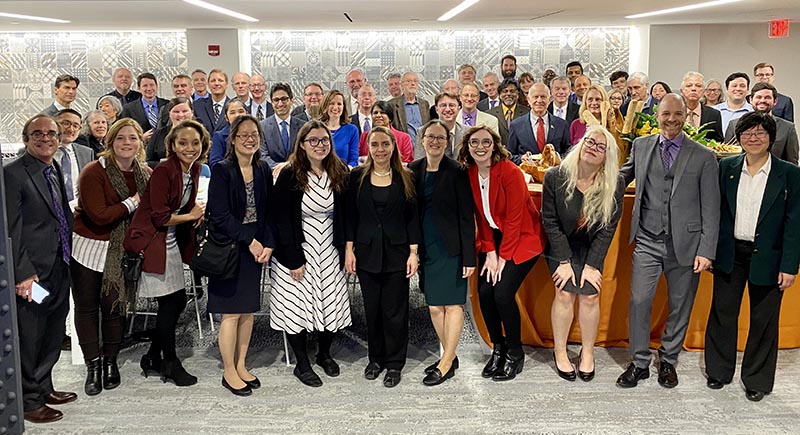 Nearly 70 APS members participated in the 2020 Congressional Visits Day to Capitol Hill to advocate for the Society's science policy priorities.

Responding to the COVID-19 Pandemic

After the COVID-19 pandemic hit in March, APS’s immediate top priority was ensuring that graduate students and postdocs could continue to be financially supported via federal grants during the health crisis. Following a grassroots campaign and direct lobbying by the Society, federal agencies agreed to allow students and postdocs to be supported from current grants.

As part of the Society’s ongoing response to the health crisis, 2020 APS President Phil Bucksbaum sent a letter to the House Science Committee outlining policy initiatives that would help the physics community overcome challenges posed by the pandemic, which has impacted APS members in myriad ways, including a severe reduction of research activity at many of the nation’s laboratories and universities.

“I want APS members to know that the Society is working hard to help get our physics community through and beyond this pandemic,” said Bucksbaum after he wrote the letter. He asked Congress to take the several steps to help restore research after labs reopen, including:

Nearly 1,000 APS members participated in a grassroots campaign to encourage their legislators to follow the recommendations laid out in Bucksbaum’s letter.

Legislation quickly emerged in Congress that advanced the recommendations. The Research Investment to Spark the Economy (RISE) Act, called for the authorization of approximately $26 billion in research relief funding to the federal science agencies, enabling them “to extend grant funding awarded prior to the COVID-19 pandemic, support training extensions for graduate students and postdoctoral researchers to alleviate the disruption to the R&D job market, and enable the refurbishment or replacement of equipment damaged because of the COVID-19 disruption.”

Through multiple campaigns across three months, including one in conjunction with 22 other scientific societies, APS members connected with legislators through phone calls, emails, and social media more than 3,000 times, leading to the bill being passed out of committee in the Senate and generating more than 140 co-sponsors in the House.

Pushing Back Against Trump Executive Actions

Last year was also marked by many White House executive actions that harmed international students who are essential to the physics community and vital to the US scientific enterprise. On July 6, for example, the US Immigration and Customs Enforcement (ICE) division of the Department of Homeland Security announced a rule change that would have forced international students currently in the US to return to their home countries or switch to an institution offering in-person instruction if their current institution had offered only online courses last fall.

Harvard and MIT filed suit against the rule, and APS rapidly developed an amicus brief to support their case. Sixteen scientific organizations, including the American Association for the Advancement of Science and the Optical Society, joined the APS brief in the Amicus Brief. Caving to this widespread opposition, ICE rescinded the July 6 directive.

“These actions show the importance of an organization reacting quickly, and they also show that the science community can truly make a difference,” said Bucksbaum following the good news.

APS faced another challenge after hearing reports that the Optional Practical Training (OPT) program might be curtailed or even eliminated. OPT enables highly skilled international students who completed their studies in the US to gain work experience for a period of time and is used as a recruiting tool by high-tech companies. With support from APS’s Office of International Affairs and Office of Industrial Engagement, APS OGA developed a plan to stimulate House Republicans to publicly defend OPT.

Francis Slakey, APS Chief External Affairs Officer, worked with the office of US Rep. Steve Stivers (R-15th-OH) on a letter defending OPT, which could then be signed by additional Republicans and sent to the Trump Administration. APS members were asked to contact their congressional representatives during the weekend to meet a tight deadline impacting a potential executive order. And they rose to the occasion.

“As a result, 12 Republicans contacted by APS members agreed to sign the letter from Stivers, tilting the issue in our favor,” said Slakey following the campaign. Mike Mayo, an APS member and tech firm owner in Austin, also played a role in the OPT campaign by writing an op-ed that appeared in the Austin Business Journal. APS OGA led another grassroots campaign on the matter.

To prevent further attacks on OPT, APS OGA developed a new report process that is designed to yield brief policy reports on a short timeline (fewer than six months). The initial report, titled “How International Students and Researchers Benefit the United States: Their Experiences, Their Stories,” is centered on a collection of personal stories from APS members highlighting the importance of OPT and J-1 visa programs. APS OGA will use the new report process as a means to quickly deliver timely information to Congress and the Administration.

APS faced yet another obstacle after the Department of Homeland Security (DHS) proposed a rule change to eliminate the current “duration of status” guidelines that allow international students who study in the US on certain visas—such as F and J visas—to remain in the country for as long as they maintain compliance with their terms of admission. The proposed rule change would have replaced the duration of status term limit with an arbitrary and restrictive two- and four-year limit, depending on one’s country of origin. In response, APS mounted a campaign to collect and submit as many unique comments as possible to DHS with a goal to delay the proposed rule’s implementation. The campaign yielded almost 1,600 comments. APS also sent a comment representing the entire Society.

APS wasn’t the only organization to mobilize on this issue. Tens of thousands of comments were sent to DHS — but, in a significant show of concern, nearly one in every 20 came from an APS member.

Making the Case for Helium

Helium continued to be an important advocacy issue for APS OGA last year. For the past several years, academic researchers have experienced unsustainable price increases and unreliable delivery of liquid helium. According to an APS survey of helium users nationwide, the average price of liquid helium increased by nearly 25% from 2018 to 2019; some researchers’ prices tripled during that time.

To deal with this crisis, leaders from four APS Units - DCMP, DMP, DAMOP and DQI - worked with APS OGA to urge Congress to ensure that federal users, including researchers supported by federal grants, maintain access to the helium marked for federal use remaining in the Federal Helium Reserve after September 30, 2022—the date by which the General Services Administration will complete its disposal process.

Elsesser and APS member Joseph DiVerdi, a chemistry professor at Colorado State University, gained ground toward the helium goal after an in-district meeting with US Rep. Joe Neguse (D-CO-2nd ). Following the meeting, Neguse indicated that he would take the lead on legislation that would require the in-kind helium program to continue under any company that purchases the Federal Helium Reserve. DiVerdi also made the case for helium in a widely circulated New York Times op-ed.

“I want to thank APS volunteers for their extraordinary dedication in partnering with APS OGA last year. We know that many of them are busy teaching classes, conducting research, or even finishing PhDs, and APS OGA wanted to ensure our advocacy software is as accessible and user-friendly as possible,” said Callie Pruett, Senior Strategist for Grassroots Advocacy.