The 71st Annual Division of Fluid Dynamics (DFD) Meeting in Atlanta last year had its fair share of sessions on topics most people would associate with fluid dynamics: bubbles, drops, turbulence, and flows. But intermixed with research on fizzing fluids or whimsical waves was the science behind the curiosities of creatures. A number of talks covered research into how animals and insects use fluid dynamics, including how bats suck up nectar, how fruit flies fly, and how wombats create their unique cuboidal feces.

Anette Hosoi (Massachusetts Institute of Technology), recipient of the 2018 Stanley Corrsin Award, brought “Hairy Hydrodynamics” to DFD with her research on bats, specifically how nectar-eating bats manage to drink their dinner. The secret is tiny hair-like structures that trap nectar, but in Hosoi’s lab, the research team wanted to know more about how these structures work: What properties allow the flying-feasters to optimize the amount of nectar they can grab?

Researchers created rubbery faux bat tongues with different densities of bristles to see their effects on trapping nectar: Too few, and the nectar can flow down and off the tongue, but too many and there isn’t enough space between the structures to capture much nectar at all. Bats, as it turns out, have just the right number of bristles to combat the drip and can pick up 10 times more nectar than if their tongues were smooth. Certain types of parrots, a tiny Australian marsupial called a honey possum, and honey bees all use similar hair-like structures to help slurp up their food.

Hosoi’s group has also used the materials they developed to mimic bristles on bat tongues to study the effect of flexible hairs on the flow of fluid. The subsequent findings, where shape of the flexible hairs creates drag, matches findings from previous researchers, including Stanley Corrsin, who studied placental blood flow through finger-like structures called villus trees in 1977.

The fast-flying antics of fruit flies may make them a nuisance to many people, but Itai Cohen (Cornell), an invited speaker at DFD and former chair of the APS Forum on Outreach and Engaging the Public, finds them fascinating. In an invited talk, Cohen explained—and at times demonstrated with his own pair of scaled-up fly wings—how flies are able to make quick adjustments in the air.

Due to their small size, fruit flies have to adjust their motion up to 100 times faster than a larger animal to deal with aerodynamic instabilities, beating their wings in elegant figure-8 motions up to 30 times in the blink of an eye. To figure out how it is flies achieve this, Cohen had to slow them down: By taking slo-mo video of flies and using an algorithm to reconstruct the image frames, the researchers could pinpoint what allows these adjustments. 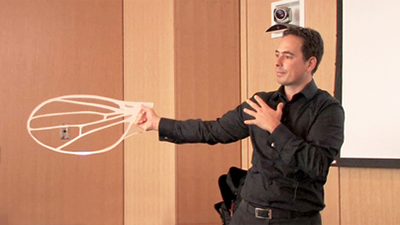 Itai Cohen demonstrates how fruit flies can be so acrobatic.

The research team’s results identified the biggest factor for flight control in fruit flies: The pitch, or angle, of the wings. Smaller pitch, and the fly can generate more forward thrust. These pitch adjustments allow flies to pirouette and self-correct in mid-air, but these adjustments can only be made thanks to two specialized structures on the fly: a pair of organs called halteres that act as a kind of vibratory gyroscope, and a specific muscle that, when genetically silenced, leaves flies unable to make adjustments.

Patricia Yang, a postdoctoral fellow at the Georgia Institute of Technology, along with her colleagues Miles Chan, Scott Carver (University of Tasmania), and David Hu, set out to solve one of the animal kingdom’s odd mysteries: How do wombats, a type of marsupial from Australia, make cube-shaped poop? Yang’s studies of the hydrodynamics of fluids in the bodies of animals sent her searching to see how the soft tissues in the wombat’s digestive system could compact fecal matter into the odd shapes wombats leave behind.

Wombats create cubed poop to mark their territory and communicate with other nearby wombats—and the cube shape keeps the scat from rolling away, unlike the spherical or cylindrical shapes from other animals. Yang obtained intestines from Tasmania that had been collected from wombats after unfortunate run-ins with vehicles. After studying the properties of large intestines, still full of feces, Yang determined that points of varying elasticity in the intestinal wall compressed the fecal matter as it passed through, creating the cubed shapes.

Cubes are difficult shapes to create organically, and in manufacturing, cubes are generally only made by molding or cutting materials into a cube. Yang’s discovery into how wombats can naturally create cubes by compressing material may eventually lead to new methods in manufacturing.